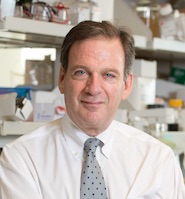 Dr. Alan Saltiel investigates the hormone insulin and its role in regulating cellular sugar levels, including how cells send and receive signals. Understanding these processes may shed light on dysfunctioning glucose and lipid metabolism, particularly as it related to Type 2 diabetes. He hopes to elucidate the precise function of these pathways and their roles in the pathogenesis of diabetes, with the goal of developing new therapeutic approaches to the treatment of diabetes and related disorders.

Dr. Saltiel has spent his research career in both academia and the pharmaceutical industry. His work has been largely devoted to the role of cellular signaling in understanding the actions of insulin and growth factors; beyond a deeper knowledge of diabetes, this work has also led to insights about cancer, heart disease and nervous system disorders. He has an international reputation as an expert on the hormone insulin and its role in diabetes and cellular signaling.

Before he joined the UC San Diego faculty in July 2015, Dr. Saltiel was Mary Sue Coleman Director of the Life Sciences Institute at the University of Michigan. Prior to joining the University of Michigan in 2001, Dr. Saltiel was Distinguished Research Fellow and Senior Director of the Department of Cell Biology at Parke-Davis Pharmaceutical Research Division (now Pfizer Global Research).

Insulin controls cell growth, differentiation of cell types, gene expression, enzyme activity, and the movement of proteins within a cell. His laboratory has pioneered investigations into how signals are segregated into special regions in cells. They discovered a novel group of proteins called “molecular scaffolds” that direct enzymes and other proteins to specific compartments in the cell. These processes insure that the right cell responds in the right way to insulin and other hormones.

Dr. Saltiel holds 18 patents and has extensive experience with the FDA's testing and approval process for new drugs. He has developed drugs for diabetes and cancer.