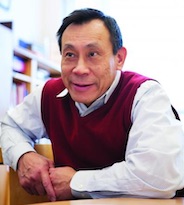 My laboratory studies the mechanism by which hyperglycemia and insulin resistance are causing diabetic retinopathy, nephropathy and cardiovascular diseases.

We use multiple approaches such as culturing specific microvascular and arterial vascular cells from the retina, glomeruli and arteries in order to determine the actions of insulin on the cytokines as well as the interfering effect of hyperglycemia and loss of insulin actions on the functions of these cells.

In addition, we approach the question of diabetic complications from clinical research studies. We have characterized a large group of type 1 diabetic patients of extreme duration, greater than 50 years of diabetes, and have found that 30% of these patients do not have significant retinopathy and nephropathy. From tissues derived from these patients using both genomic and proteomic approaches, we are identifying protective factors which have prevented these patients from developing significant diabetic retinopathy, nephropathy and preservation of their beta cell function for over 50 to 80 years.

From these cell based and clinical studies, we have developed important mechanistic ideas such as activation of protein kinase C, the role of vascular endothelial growth factor (VEGF) and selective insulin resistance as some of the basic mechanisms for the pathogenesis of diabetic microvascular and cardiovascular diseases which are now widely studied by multiple laboratories.