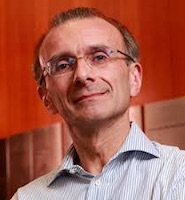 The Accili laboratory studies the mechanism of insulin action and the pathogenesis of diabetes, with a focus on pancreatic beta cell failure. Dr. Accili’s research has delved into the pathogenesis of diabetes, the integrated physiology of insulin action and mechanisms of pancreatic beta dysfunction. He is best known for the identification of a family of DNA-binding proteins that collectively regulate diverse pathophysiological processes, including liver glucose and lipid production, food intake, insulin production and adipogenesis. He has received numerous awards, including the 2003 Lilly Award for Outstanding Scientific Achievement by the American Diabetes Association. His work has been published in leading medical research journals. He has served on several editorial boards, including the Journal of Clinical Investigation and Diabetes. He is a member of numerous advisory panels for academia, government and industry. He is an elected member of the Association of American Physicians and the American Society for Clinical Investigation. His work is supported by the National Institutes of Health, the American Diabetes Association, the Russ Berrie Foundation, and the Brehm Coalition.