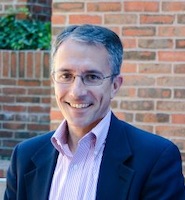 Jose C. Florez is the chief of the endocrine division and the diabetes unit at the Massachusetts General Hospital (MGH), where he holds the John T. Potts Jr., MD Endowed Chair in Medicine. He is also professor of medicine at Harvard Medical School and an institute member at the Broad Institute of MIT and Harvard, where he directs the Diabetes Research Group, co-directs the Metabolism Program, and is active in the Program in Medical and Population Genetics.

Dr. Florez’s research interests lie on the genetic determinants of type 2 diabetes and related metabolic traits, and how these variants may impact disease prediction and therapeutic choices. Thus his laboratory leads two parallel efforts in gene discovery and pharmacogenetics. With regard to the former, he is involved in the conduct, analysis and integration of genome-wide association studies for type 2 diabetes and related traits, in the Framingham Heart Study and other international consortia such as MAGIC, GENIE, DIAGRAM and SIGMA. These and other discoveries can then be applied to a clinical trial such as the Diabetes Prevention Program, where participants at high risk of developing diabetes were randomized to preventive interventions: in this manner, whether diabetes-associated genetic variants influence response to treatment can be assessed. He is also conducting two pharmacogenetic studies: the Study to Understand the Genetics of the Acute Response to Metformin and Glipizide in Humans (SUGARMGH) intends to establish whether genetic variation at selected loci influences the acute response to a sulfonylurea, metformin or a glucose load; and the Patients with Hyperglycemia Assessed for Response to Metformin by Genetics (PHARMGen) study is mining the electronic medical record to recruit patients who have failed monotherapy, to examine the genetic determinants for metformin response.